WHAT IS THE CELIAC DISEASE

THE FRESH PASTA LABORATORY FOR CELIACS

What is Celiac disease

Celiac disease is a permanent intolerance to gluten.

Gluten is the triggering factor of celiac disease.

It is the protein component found in wheat (what is commonly called “wheat”) and in other cereals, for example spelled, barley, rye, oats, kamut (Egyptian grain), spelled, triticale, bulgur (cooked wheat), malt, greunkern (greek wheat) and seitan (food made from gluten). 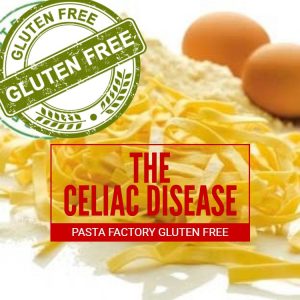 Eliminating gluten from your diet allows the celiac to lead a healthy and healthy life.

The gluten-free diet is in fact the only therapy possible.

This is the only cure for celiac disease.

“Enteropathy” means illness of the intestine, it is in fact the intestine of the celiac that fails to assimilate the gluten, which is therefore considered a toxic agent.

Gluten is not actually present in the grain of the cereal or in the flour, but is formed only after the addition of water and the formation of the mixture.

What are the foods to be excluded?

Bread, pasta, biscuits, pizza and all the little traces of wheat flour.

Food education is very important, as even small doses of gluten can cause damage.

When and how does it manifest?

Celiac disease can occur in pediatric age, but also in adulthood.

It manifests with symptoms such as: vomiting, diarrhea, weight loss, stunting, abdominal pain.

It is diagnosed with an enteric biopsy.

To avoid contamination of naturally gluten-free products, what precautions must we comply with?

In order to have products suitable for celiac consumption it is necessary that the manufacturing companies apply a correct control plan of the raw materials and the finished product, it is also necessary to constantly monitor the production process, the working environments, the equipment, the plants and the operators.

All this becomes even more important considering that dangerous gluten cross-contamination phenomena can occur during production.

In this way, extreme, it can happen (especially for some categories of products such as flour) that from a naturally gluten-free ingredient you get a finished product (starches, flours, starch, etc.) contaminated.

If, for example, wheat or another forbidden cereal is also processed in the same mill, there is a high risk of contamination of the finished products, the presence of gluten in the workplace and in the transport systems used.

What does the legislation say about it?

The national production and / or packaging plants of the products regulated by the legislative decree 27th January 1992, n.111, which has implemented at national level the directive 89/398 / EEC on products destined to a particular alimentation, must be previously authorized by the Ministry of Health.

The authorization for the production and / or packaging is issued “subject to verification of the existence of the sanitary conditions and technical requirements, prescribed by Presidential Decree 26 March 1980, n.327 and subsequent amendments, and the availability of a suitable laboratory for the control of the products “(art.10 of the legislative decree 111/92).

The verification is carried out by the Ministry of Health with the collaboration of the Istituto Superiore di Sanità, through an inspection inspection that also involves representatives of the local health authority responsible for the area.

Further information is available on the Ministry of Health website, where a list of authorized establishments is also available (with indication of companies, registered office, plant location and type of production).

Is there a national census on Celiac people?

In November 2011, the Department of Veterinary Public Health, Nutrition and Food Safety of the Ministry of Health published an annual report on Celiac disease for the year 2010. “The prevalence of celiac disease in both children and adults is estimated around 1% for which if we consider that the population in Italy reaches 60.340.328 means that in theory the number of coeliacs is around 600.0000 against 122.482 actually diagnosed and registered.

Every year the Regions and the Autonomous Provinces, pursuant to art. 6 of Law 123/2005, provide the Ministry of Health with data coming from its own territory; the Ministry in turn provides for their elaboration “.

Celiac disease, from legumes Gluten Free pasta that does not get fat

Good news for people with celiac disease and for all those who use gluten-free foods, which can make you gain weight: the prospect of a paste that does not get fat and does not overcook.

For now, at the laboratory level, a research by the Institute of Food and Nutrition Sciences (ISAN) of the Faculty of Agricultural, Food and Environmental Sciences of the Catholic University of Piacenza guarantees it.

In fact, several studies have shown a progressive increase in overweight and obesity in the celiac population, with a consequent increase in the incidence of metabolic diseases.

The cause is in the characteristics of foods containing starch (bread, pasta and baked products) that make up the gluten-free diet and which are characterized by rapid absorption and high glycemic indexes (Ig).

“People with celiac disease feed on foods with a higher glycemic index than foods containing gluten and this often leads to weight gain”, explains Gianluca Giuberti, who led the research project of the Piacenza Institute.

“We therefore thought, even at the request of some companies that produce food for these subjects, to hypothesize the use of alternative sources of starch with a low Ig as the legumes”.

This type of starch is slowly absorbed when compared to that of cereals commonly used in the formulation of gluten-free products.

“The results obtained are very promising – adds Francesco Masoero, director of the Institute of Food and Nutrition Sciences.

“We formulated gluten-free pasta dishes (using rice and / or teff flour bases) using various combinations of particular varieties of common bean, in order to obtain a series of products related to the Mediterranean tradition, but compatible with the dietary habits of the celiac patients.

The data show how the inclusion of bean flour can significantly reduce the glycemic index of pasta (with a decrease in the order of 30-40%), without modifying the main technological characteristics of the product “.

Experimental researchers have experimentally made bread and pasta using the bean flour among the ingredients, obtaining products with greater resistance to cooking and with excellent taste and aroma characteristics.

Other products, including biscuits and crackers, are still being formulated by the Isan, in order to expand the catchment area for consumer-friendly gluten-free products.

“There are already companies interested in the large scale production of these foods – concludes Giuberti – the next step will be to definitively evaluate the ‘weight loss’ effectiveness of these products on people with celiac disease, to confirm the excellent results obtained in the laboratory” .

Then production can start.

If you are interested in opening a workshop for the production of fresh pasta or an industrial pasta factory for gluten-free dry pasta, contact the Aldo Cozzi sas, it will be at your disposal to provide you with the information necessary to open your gluten-free pasta factory.